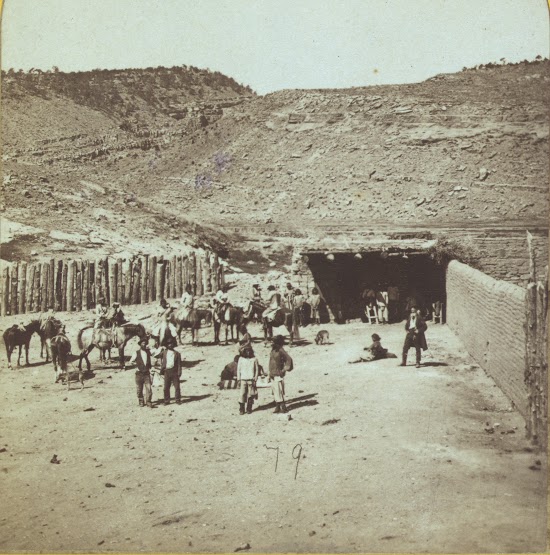 In celebration of my two new Native American books, here's a photo of old Fort Defiance, Arizona, from 1873. This fort was established in 1851 to defeat the Navajo, who had been resisting white expansion into their land. Like most forts in the Old West, it didn't have walls since Native Americans almost never attacked large settlements, especially military ones, as they could not afford the losses this would incur.

It looks like dusty, miserable place, but for the soldiers it was home. It seems they're having a visit from some local Navajo. By 1873, most of the Navajo were at peace with the Americans. I've zoomed in on some of the figures below. 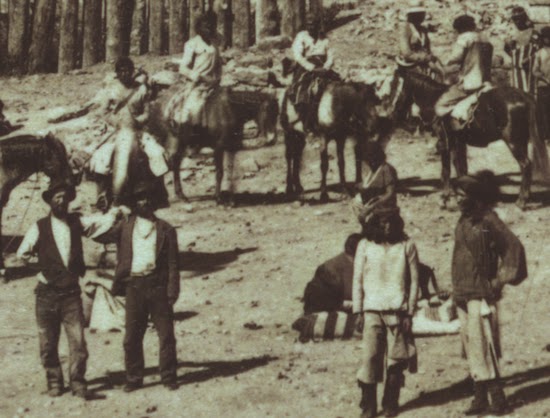 Acquiring food and water must've been a challenge in that area.

That is so bizarre. I had no idea they had an underground fort in the desert, and mostly made the fort because they were expanding into Indian territory and feared reprisals -- and yet there are Indians hanging out right there! Incredible pic -- thanks for sharing!

Sounds like they borrowed a good idea from their native American neighbors, the Navajo hogan.

Yes, part of it is cut into the hillside. You can see the walls on two sides. These "forts" weren't very well fortified because the Native Americans in the region rarely attacked buildings, which could be easily defended by a few firm men with guns.