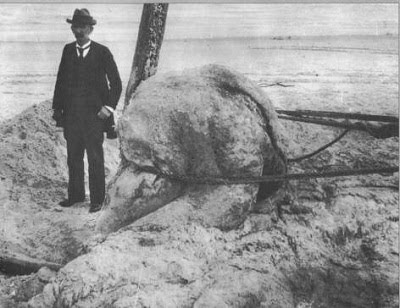 It's the end of a long week and I'm feeling frivolous, so this Photo Friday is dedicated to one of my favorite mystery beasts--the globster!

What's a globster, you ask? It's an unidentified blob of flesh washed up on the beach. It's smelly, decaying, and generally nasty. People used to think they were some type of sea monster or unidentified species of giant squid or octopus. I've always had a soft spot in my heart for globsters. Perhaps it's the name, or their irresistible cuteness. Perhaps it's because I always root for the underdog, and you can't get much lower than being a rotting hunk of unidentifiable meat on the beach being gawked at by local yokels.

The above photo is of the St. Augustine Monster, which washed ashore near St. Augustine, Florida, in 1896. Needless to say it caused quite a stir. A scientist who say it thought it was an octopus because of the arm-like appendages you can see here. Journalists, of course, immediately labeled it a sea monster.

Maybe the journalists were right for once. Maybe in the unexplored depths of the ocean there are colonies of globsters, perhaps with a highly evolved civilization to hide themselves from our advancing technology. They're only spotted when one dies and floats to the surface!

Alas, I've never seen a globster. My closest brush with the unknown was "seeing" the infamous Thunderbird photo. I have to be content reading about them at Globhome. 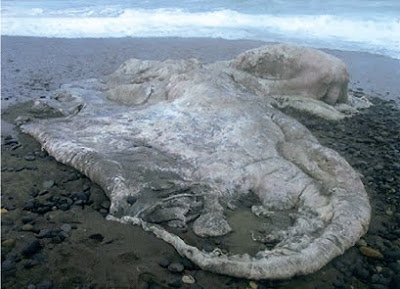 This photo is of the Chilean Blob. It washed up on the shore of Chile back in 2003. At first it couldn't be identified, but then some party poopers at a biological laboratory checked the DNA and found it came from a sperm whale. Part of the blubber layer separated from the rest of the decaying animal and eventually made it to the beach and into the newspapers. The researchers theorize that most or all globster may also be whale blubber.

But hey, DNA samples can be wrong, just ask anyone on death row! There's still a chance that the Lost Civilization of the Globsters will rise from the deep to reclaim their dead. . .

[Photos of the St. Augustine Monster and Chilean Blob courtesy Wikimedia Commons]
at 08:47

Thanks for teaching me something new. I've never heard of Globsters before today. :D