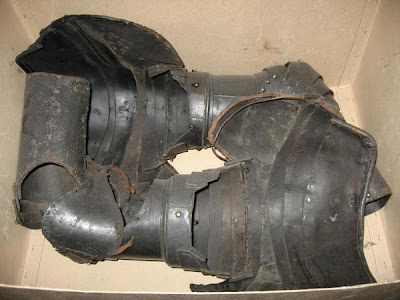 Today I'm trading blogs with A.J. Walker, a medievalist and novelist who's just starting a virtual book tour for his first fantasy novel, Roots Run Deep, epublished by Double Dragon. He has a series called Medieval Mondays over at his blog and today I'm blogging over there about Medieval handgonnes. So without further ado. . .


In the first chapter of my fantasy novel Roots Run Deep, a team of goblinkin are preparing for a raid on a human city.

Kip was as prepared as she could be. Like anyone who lived on the Reservation, she went armed at all times. Not that she had much. Her tattered leather jerkin gave scant protection, and for weapons she carried a flint knife and a tfaa, a traditional goblin fighting stick. A balanced, two foot-long rod carved from ironwood, the tfaa didn’t look like much, but in skilled hands it could disarm and cripple a swordsman. Prenta had gotten rid of her showy clothes and dressed in a more practical leather jerkin similar to Kip’s.

These impoverished goblinkin are wearing leather armour because they can't afford anything better and their human rulers forbid them from bearing metal weapons and armor. (This ban doesn't last, but that comes later in the story. . .) Leather armour is a staple of fantasy fiction and roleplaying games, yet many people don't realize just how common it was in medieval warfare. Even knights wore it.

Leather armour goes back to ancient times and continued in use through the Middle Ages and into the Renaissance. This picture shows the shoulder and upper arm portions of an elegant suit of leather dating to the Italian Renaissance, courtesy of the Schola Forum. As you can see, it looks much like regular metal armour, and many historians believe that it was worn as much as or even more than metal armour. A suit of plate was hot and heavy, so on the march or during a friendly tournament the knight may choose to weather cooler leather. The rank and file would also be fitted with leather and perhaps some portions of metal armour for vulnerable places such as the head and chest.

While leather was much cheaper, it provided pretty good protection. Regular soft leather wasn't much help, but combined with quilted padding provided some protection, especially against blunt weapons such as maces.

More effective was cuir bouilli--boiled leather. If you soak leather in water and then place it in boiling water, it becomes elastic and pliable. It soon begins to shrink, thicken, and harden. As it's hardening the leather is hammered onto shaped blocks to create breastplates, greaves, vambraces, and anything else. A full suit of armour could be made in this way. The 14th century French chronicler Jean Froissart claimed that it was "leather that no iron can pierce" and while that may be overstating the case, leather armour certainly gave good protection. Games such as D&D probably undervalue its effectiveness. Modern experiments show that the average sword blow wouldn't get through, although a good English longbow would make short work of a leather breastplate! This basic article (PDF) explains the technique. Also check out this thread from Schola Forum for some more insights and pictures.

The picture below from The Historians' History of the World shows some improvements on leather armour, with overlapping metal scales, discs, and rings. These were all cheaper yet pretty effective alternatives to full plate and variants of these were used from ancient times into the Renaissance. 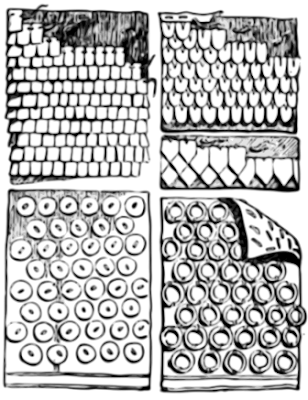 Thank you for being stop number one on my virtual book tour! I hope you'll come along for the rest of it. Here's the schedule for this week

Sharon - Grandma is a Writer said...

Interesting information. I enjoyed reading this. I didn't realize that there was leather armour, although it certainly makes sense.

The last examples you show remind me of the controversies over the Bayeux Tapestry chain mail. It's suggested that the rings, discs etc of chain mail were most likely stitched to a leather coat.

Great info on leather armor. As you state, it's importance does tend to be undervalued. So thanks for the reminder!

Good article. I am writing a sequel to my fantasy novel, Emily's Shadow, and a 1950s guy is about to get weird and dress in medieval armor--I like the idea of leather. Where might someone get ready-made leather armour in England? Steal if from a museum, perhaps? And how hard is it to put the stuff on one's body?
I appreciate your help. Good luck with your words and travels, family too.

Thanks for sharing the process for making hardened leather.

Good luck on your new release.

Christina,
Several armour companies make and sell leather armour. It's slow to put on, which is why people liked to have a squire to help them! Leather armour tended to be simpler than a full suit of steel plate. That's impossible to put on yourself!

The medieval armour would be the most appropriate thing I would like to have in my medieval collection. 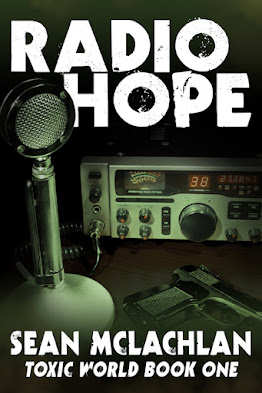