Flight to Fez Out Now! 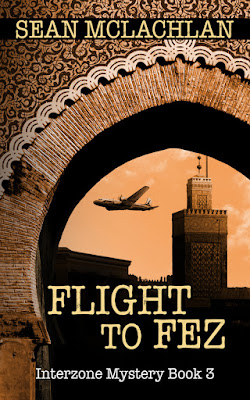 The third and final book in my Interzone Mystery series, Flight to Fez, is now out! This time Shorty has to go to the French sector to solve a murder, with a little help gun, his fists, and his lovely gal. A blurb is below.

Only in Tangier could a literary event turn into a murder scene.
I’m “Shorty” MacAllister, private detective. I’ve investigated all sorts of crazy cases in this lawless town, tracking down con men and Nazi fugitives, anarchists and bank robbers, all the while running my own secret angle.
But I never thought that when I went to hear my friend Jane Bowles read her latest story I’d end with a murdered man in my lap, and an old war buddy getting pinned with the crime.
After that, things got a whole lot more complicated.

You can get Flight to Fez on Amazon and anywhere else ebooks are sold.

My Writing Year: A Look Back And A Look Forward

The year 2020 is gone, and I'm sure none of us are sad to see it go. Hopefully 2021 holds out more promise with vaccines and the chance to live our lives fully once again. Here in Madrid we had worse lockdowns than most, but that didn't affect my writing. In fact it helped, because I had fewer distractions. Nothing like writing to stave off boredom and cabin fever!

This was a good writing year for me. My ghostwriting career has taken off with a great new client, the return of an old one, and the regulars staying with me. Demand for ebooks has gone up massively this year and because of that I'm getting more work than ever before. The sales on my own books rose as well. It's never been a better time to be an indie writer.

While my income has risen, my word count is almost the same as 2019. I set myself an annual goal of a million words. I've never made that goal, but having a tough goal makes me work harder. I got 947,000 words written in 2020. Not bad but still well shy of the million mark. I'll make it some year!

I also reached the milestone of writing my 50th novel. I'm now hard at work on numbers 52 and 53. There's no secret to this. I just keep plugging away every day and the novels pile up. I know a lot of writers who have written far more than I have.

The increased demands of my ghostwriting career has meant that I haven't gotten as many of my own books out in 2020 as I would have liked. At least I added a fourth book to the Masked Man of Cairo series, The Case of the Karnak Killer. I also added a short story collection to the Toxic World series, Tales from the Toxic World.

Both series will see new novels in 2021. I'm also researching a new mystery series set in the Weimar era, and have various other projects in the works. You can check my progress in the right-hand column of this blog and stay in touch via my newsletter.

I hope you all are staying well through this pandemic. I've gotten off easy, not having lost any loved ones or my job. So many others have it worse. Stay safe and get vaccinated as soon as you can!

Last week I hit a milestone in my writing career—I handed in my 50th novel. Novel #51 is in edits.

While it’s only a number, it did feel like an achievement. I came to writing late, when I was 30, so I’ve only had two decades of writing so far in my career. While that makes me feel like I’m always playing catch-up, it makes me work pretty hard too. I started out in journalism and moved into nonfiction books and professional blogging back when that was a thing. I dabbled in fiction writing during that time but only seven years ago did I get serious about writing novels and it became my bread and butter.

The majority of my novels have been written as a ghostwriter for various publishers and individual clients. While I have more than a dozen novels out under my own name, they do not sell enough to be my sole income. Instead, they act as a CV for my ghostwriting work, which fills out my income nicely.

So how do I feel about having written so many novels? Satisfied, I suppose, but putting it in perspective it isn’t all that big of a deal. One of my good friends is a contract attorney. He’s worked on more than 50 cases. The research, writing of briefs, consultation with clients, and court time must surely equal the amount of work that goes into a novel.

I also have a friend who is a dedicated long-distance runner. He’s run more than 50 marathons. I don’t know about you, but I’d rather write the novels!

These two people have a work ethic. They work continuously at law or running and over the years their achievements pile up. Having come to writing late, I’ve always looked at it as a job, and put in proper work hours. After all this time, the words have added up, and I didn’t even have to ruin my knees or go to law school to do it.

Besides satisfaction, I also feel grateful to all of you for reading my stuff. Without readers, a writer isn’t going to have much of a career. So thanks. I really do appreciate it.