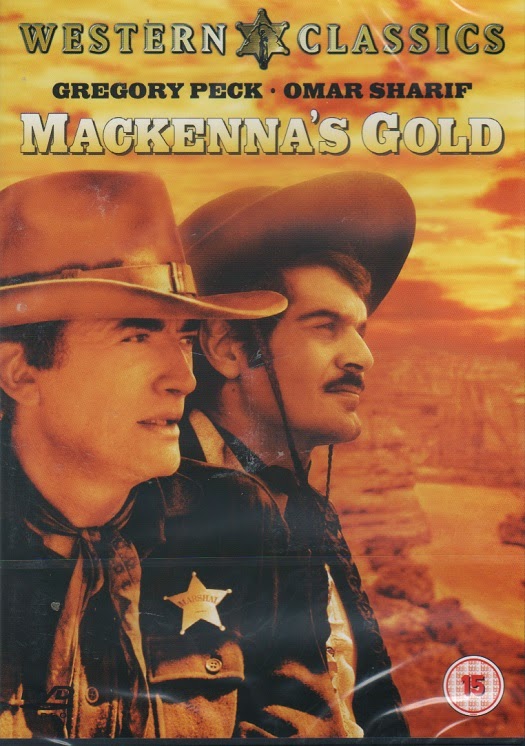 Today I'm participating in the Underrated Treasures Blogfest, where bloggers are picking their favorite movie, book, or album that nobody else has heard of. For me, it has to be the 1969 western MacKenna's Gold. This move had everything--stars, a clever plot, hidden treasure, Apaches, heaps of character actors, and plenty of twists and turns. Sadly, even many fans of the genre are unfamiliar with it.

MacKenna's Gold follows the attempts by Marshal MacKenna (played by Gregory Peck) to arrest the bandit Colorado (Omar Sharif). Unfortunately, Colorado captures MacKenna and forces him to lead his banditos to a hidden valley full of Apache gold. McKenna had recently found a treasure map, you see, but in his quest for justice he was too busy hunting down banditos to look for it himself.

It turns out that everyone else has heard the rumors too, and soon the banditos and their unwilling lawman ally have to contend with a corrupt cavalry officer (Telly Savalas) and his equally corrupt soldiers, as well as a horde of gold-hungry townies. And then, of course, there are the Apaches. . .

What I like about this film, besides all the fun characters, is how society totally breaks down at the first hint of gold fever. Gregory Peck's character is the only one who maintains his civilized role, reminding me of Gary Cooper's character in High Noon. This hokey Western ends up being a biting social commentary.

This is not a perfect film by any stretch of the imagination. The original was supposed to be three hours and was cut to two, and the director bridged the gaps with bad narration. There are also some crummy shots thanks to changing the film stock halfway through production. These problems might account for why this film is so poorly remembered, but that's a shame. It's heaps of fun and well worth hunting down.
at 04:31

Hi, Sean. Thanks for sharing your pick for the Underrated Treasures Blogfest. This movie sounds familiar. Probably one that I've seen part of when my hubby was channel hopping.

I might've seen it when I was younger (since I watched a lot of Westerns) but I'll have to watch it again to remember the story. Good pick, Sean.
And thanks for participating in my blogfest!

I have actually heard of this one- mainly because my Fiance is a huge western fan. :)

Considering my mother's penchant for classic films -- and how many she and I watched together when I was a kid -- I can't believe I've never seen this one. Especially considering how many stars are in it!

I saw that movie a long time ago. I remember enjoying it but then I loved the western genre.

Now I know I will have to track that film down... great actors in it, though I never heard of it.

Sounds like a great old west film! I've never heard of it before but I'm adding it to my list now!

MacKenna's Gold also had a great intro tune, too. THE STALKING MOON, also with Gregory Peck, was another outstanding unappreciated Western!

Some of the old cowboy films are definitely big fun! Have never seen this one.

I like some westerns, and Omar Sharif has always been a favorite actor. It's his eyes, I think. Even Bob Dylan has acted in a few westerns. . .thanks for letting us know about this one, Sean.

The movie had quite a few stars in it!

I don't watch many Westerns, but that name sounds familiar. I might've already seen it!

I think I might have heard of this. Thanks for sharing.