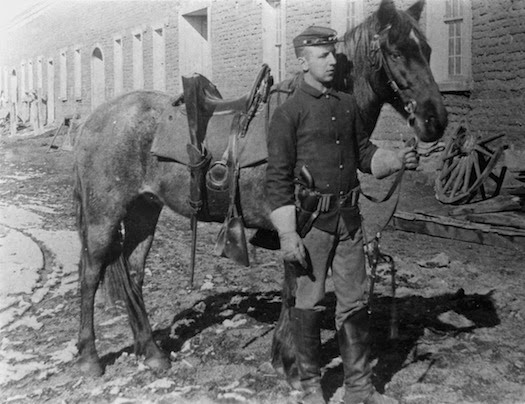 The men of the U.S. Cavalry had a tough life in the nineteenth century. Stuck in uncomfortable barracks often in the middle of nowhere, they had to fight Indians and bandits while dealing with an unsympathetic citizenry who often blamed them for not be effective. Add to that bad food, harsh climate, and strict discipline, and you wonder why anyone volunteered.

This unidentified trooper of the Sixth Cavalry looks pretty proud, though. He was stationed in Fort Union, New Mexico, in the 1880s. I like this photo because you get a good view of his kit and the adobe brick building in the background he called home.

Fort Union was operational from 1851 to 1891, its soldiers playing a part in the Apache Wars, the Civil War, and various other border conflicts. It's now a national monument where park rangers will take you on a guided tour of the ruins while reenactors show off what life was like in those days.

I wouldn't have volunteered for that either.
That's a really good photo you found.