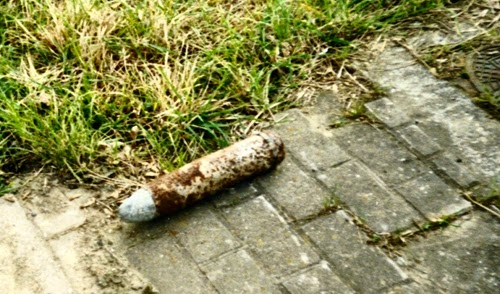 An unexploded artillery shell or grenade from the Battle of Ypres blew up on March 19 when workmen at a building site at Ypres, Belgium, accidentally set it off, the BBC reports. The explosion killed two of the workers.

There have been hundreds of these fatal accidents since the end of the war, and farmers and workmen along what used to be the Western Front still talk about the "iron harvest" of old ordnance and war materiel they find every year.

I and my press trip group were only a few kilometers away from the accident on the same day. It's scary to think that happened so close, and tragic to think that one of the world's bloodiest wars has killed two more people almost a century after it started.


Image courtesy Wikimedia Commons. This is not the shell that caused the accident.

Glad you weren't any closer. Is there a way to find those without setting them off?

War can leave it's effects long after the battle. That's so sad for the families. Too bad they didn't use today's technology to check the site beforehand.